Products prices may change due to USD rate fluctuation. Please send us a MSG/Whzapp to +92304 4407776 to confirm before posting an order.

Products prices may change due to USD rate fluctuation. Please send us a msg/Whazapp to +92 304 4407776 to confirm before posting an order. 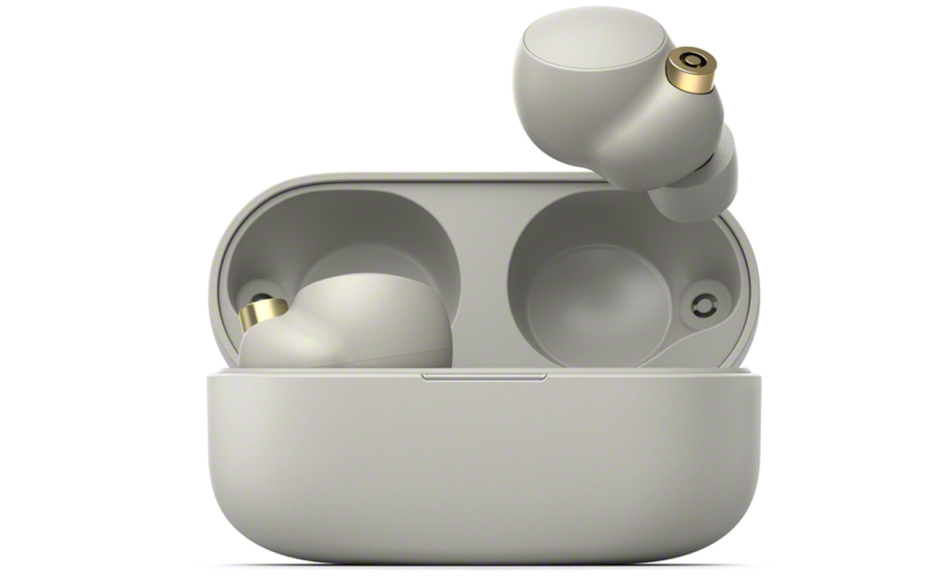 Bose has long set the standard when it comes to active noise cancellation (ANC), even in the relatively new true wireless field. But the Bose QuietComfort Earbuds finally have some real competition in the form of Sony’s $279.99 WF-1000XM4. From an audio standpoint, Sony’s wire-free earphones sound bass-forward and bright out of the box, and can be adjusted to taste with EQ—something you don’t get with the Bose model. And when it comes to active noise cancellation, this is the first pair of true wireless earphones we’ve tested to edge out the QuietComfort Earbuds in most scenarios. That makes Sony’s WF-1000XM4 earphones the best noise-cancelling pair you can buy, and our new Editors’ Choice winner.

The WF-1000XM4 earphones are available in black or silver models, and despite their rather large size, the earpieces feel light and secure. They ship with only three pairs of eartips, and the design doesn’t feature any additional fit security features, like earfins, though the earpieces stay in place quite well.

An IPX4 rating means the earpieces can withstand light splashes from any direction. You shouldn’t dunk them in water or clean them under a running faucet, but they should survive rain, sweat, and being wiped down with a damp cloth. This rating doesn’t extend to the charging case, which you should be sure to keep dry.

The on-ear controls are handled by touch-sensitive outer panels. Tapping on the left earpiece switches between ANC/Ambient modes. Placing a finger over the left earpiece’s panel puts the earphones in Quick Attention mode, muting the music. Tapping on the right earpiece plays or pauses music, and double tapping on either ear answers or ends phone calls. When not on a call, a double tap on the right ear skips forward a track, a triple tap navigates back a track, and a long press launches your device’s voice assistant. In the app, it’s possible to reassign some of these functions—for instance, you can choose to add volume control to the left ear in place of ANC.

The tiny charging case is a marvel considering how much extra juice it can hold (between 16 to 24 hours depending on ANC usage) and how chunky the earpieces are. It has a flip-top lid and a status LED on the front panel. You can charge via the included USB-C-to-USB-A cable or a wireless Qi charging pad. Sony estimates earpiece battery life to be roughly eight hours, though your results will vary with your volume levels and ANC usage. 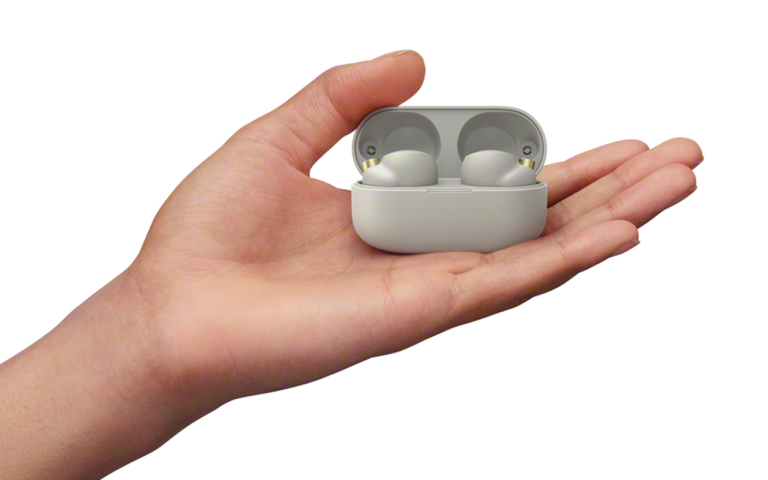 The Sony Headphones app for Android and iOS is a feature-rich companion for most of Sony’s top-shelf models. In addition to switching between ANC on, ANC off, and Ambient mode (in which the earphones use their noise-cancelling microphones to allow you to hear your surroundings), you can select Automatic Wind Reduction and enable Speak-to-Chat (in which volume is automatically lowered and the earphones go into Ambient mode when you start speaking). There’s also user-adjustable EQ, along with multiple selectable presets.

The app is also filled with borderline unnecessary extras, like a 360 Reality Audio feature we simply advise you to avoid, but that creates an unconvincing 3D effect. There’s also Adaptive Sound Control, a feature that notes your location with the use of mics, ostensibly to provide better ANC for every environment, but that doesn’t seem to make much of a difference and doesn’t seem worth it for privacy conerns. The good news is that you can pick and choose which functions to use, so you can simply ignore any features you deem superfluous.

You can also use the app to set the voice assistant function to summon Amazon Alexa or Google Assistant. The process is simple and involves using the external apps for these services. 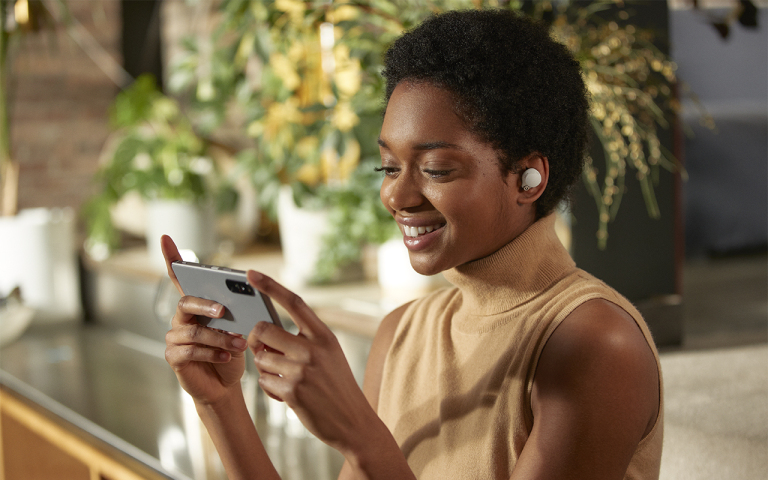 As I write this, I’m sitting two feet away from a noisy window AC unit blasting cool air on a hot day, and its volume is attenuated dramatically with the WF-1000XM4’s ANC on. Earlier, in a busy Brooklyn park with a bustling flea market and a dog run nearby, the earphones eliminated all but the loudest barks and distant car horns. A noisy power tool being used about 200 feet away was eliminated almost completely, as was a helicopter passing overhead. Low-frequency rumble, like what you hear on an airplane, is tamped down dramatically, while mids and highs are also dialed back significantly.

We tested the WF-1000XM4 against a recording of a bustling restaurant, with clanging dishes and lively conversation, playing through near-field monitors. Plenty of ANC models add hiss here and only seem to dial back the mids a little bit and the highs not much at all. Sony’s earphones take out a notable swath of the mids and highs, so you can still hear chatter, but it’s lowered dramatically.

Compared with the Bose QuietComfort Earbuds, both pairs do a stellar job dialing back the mids on the restaurant recording, but the Bose pair allows more high frequencies to pass through. They’re on roughly equal footing in the low-frequency rumble test, as both dampen the lows tremendously well. In a quiet room, the Bose pair emits the slightest hiss when on, which was among the lowest I’ve heard until now, as Sony’s earphones are virtually silent.

There are several ANC models that output such a faint hiss that it’s not even worth mentioning, but there are none to date that perform as well as the WF-1000XM4 in this regard. This may sound like splitting hairs, but it’s a measure of how much noise cancellation relies on masking to cover up what it can’t quite cancel out. With nearly all true wireless in-ears, activating the ANC in a quiet room will actually introduce noise, so that you hear a faint hiss added to the equation, however negligible it is. In the same quiet room, when you activate the ANC for the WF-1000XM4, things somehow get quieter, with no hiss added. Turn the ANC off, and suddenly you realize it managed to eliminate some midrange frequencies other pairs aren’t quite able to. The ANC here has little to no effect on audio playback, which is important. Simply put, this is the best noise cancellation you can find in a pair of true wireless earphones.

The mic array offers solid intelligibility. Using the Voice Memos app on an iPhone, we could understand every word we recorded clearly, without much Bluetooth distortion in the mix. The mics cut out background noise by design, so in a quiet environment things sound clean and clear. In a noisier setting, when you aren’t speaking, your mic seems muted, and when you speak, whatever is happening in the background creeps into the audio, but the clarity and focus on your voice is still of high quality. 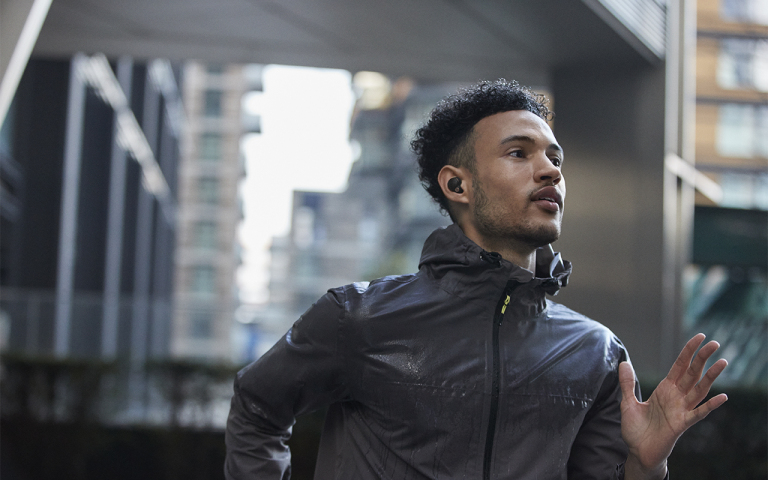 On tracks with intense sub-bass content, like The Knife’s “Silent Shout,” the earphones deliver powerful low-frequency response. At top, unwise listening levels, there’s no distortion on the deep lows, and at more moderate volume levels, the bass is still robust and fairly balanced with the higher-frequency content.

Bill Callahan’s “Drover,” a track with far less deep bass in the mix, gives us a better sense of the WF-1000XM4’s general sound signature. The drums on this track sound bass-boosted, almost thunderous, but the mix is thankfully balanced by high-mid and high-frequency presence. Thus, Callahan’s baritone vocals sound extra-rich in the low-mids and crisp in the high-mids, while the higher-register percussion and the acoustic strumming both get a bright edge. This is definitely a sculpted, bass-forward sound signature, but it’s not over the top, and the EQ allows you to adjust things to taste—something you can’t do with Bose QuietComfort Earbuds or the Apple AirPods Pro.

See How We Test Noise-Cancelling Headphones

On Jay-Z and Kanye West’s “No Church in the Wild,” the kick drum loop receives enough high-mid presence for its attack to retain its punchiness. The vinyl hiss and crackle, usually relegated to background status, take a more prominent step forward in the mix, so the highs seems to be quite sculpted, but not uniformly boosted. The sub-bass synth hits that punctuate the beat are delivered with a substantial subwoofer-like punch. The vocals on this track are conveyed cleanly and clearly, without much added sibilance. So the lows and highs are dialed up, but there’s a solid focus on clarity and definition, and there’s room in the app’s EQ to make all boosting more subtle. 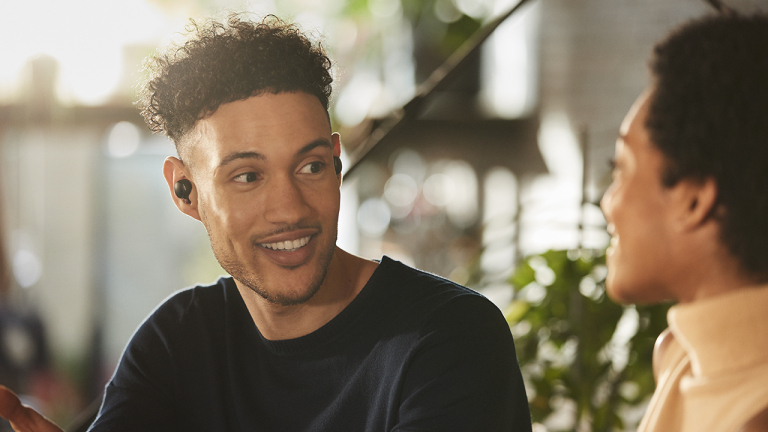 Orchestral tracks, like the opening scene from John Adams’ The Gospel According to the Other Mary, are delivered with a fairly ideal balance of lows and highs. The lower-register instrumentation gets some added richness, but lacks the truly powerful bass push we hear in pop mixes, and the earphones don’t try to invent bass presence where it doesn’t exist. The high-mids and highs are crisp and defined. Purists looking for an accurate sound signature may not love the default settings for the drivers, but with some tweaking in the EQ, they can deliver something close to a flat response.

Click one of our representatives below to chat on WhatsApp or send us an email to xstationpk@gmail.com

Sales & Marketing M Ali
× How can we help you?